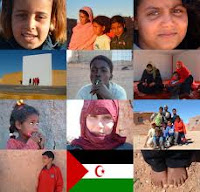 AROUND 1,000 Spanish people have travelled to Tindouf in Western Sahara this weekend, just a month after two aid workers were kidnapped.
The hostages, Enric Gonyalons and Ainhoa Fernández de Rincón, both from Spain, are believed to be in the hands of a Moroccan Al-Qaeda cell, and have not yet been released.
Three charter flights from Madrid, Barcelona, Valencia, Bilbao and Sevilla took members of the nationwide Friends of the Sahara People Association to the border town, which lies in disputed territory between Western Sahara and Algeria, who appeared unfazed by the possible risks they faced.
The Association’s leader, José Taboada, said ‘the Sahara people’s needs are greater than any danger’ that the travellers could be in, although adds that both the organisation and the managers of the refugee camp in Tindouf, where they will be staying, had such watertight security measures in place that the Spanish visitors could not be in safer hands.
Nobody will be allowed to wander off on their own, says Taboada.
They will be expected to abide by organisers’ requests to the letter to ensure their wellbeing, and the Spanish embassy has been advised of full identification details of the travellers, plus their probable whereabouts over the next few days.
Many of them were summer foster parents for children of Tindouf refugees as part of the Holidays in Peace programme, where young Saharans spend July and August with families in Spain and take part in excursions and fun activities to give them a break from their war-torn daily existence.
Towards the end of each year, the foster parents are given the chance to travel to Tindouf to be reunited with their little charges and see how they live.
THINK SPAIN, 4/12/2011